Mobile Factory, Inc. (Hereinafter “Mobile Factory”, Headquarters: Shinagawa-ku, Tokyo, CEO: Yuji Miyajima)(Tokyo:3912) has announced its start of development of “blockchain related services” in the financial results of January 19th, 2018. We will inform you of the outline and future prospects of this project. 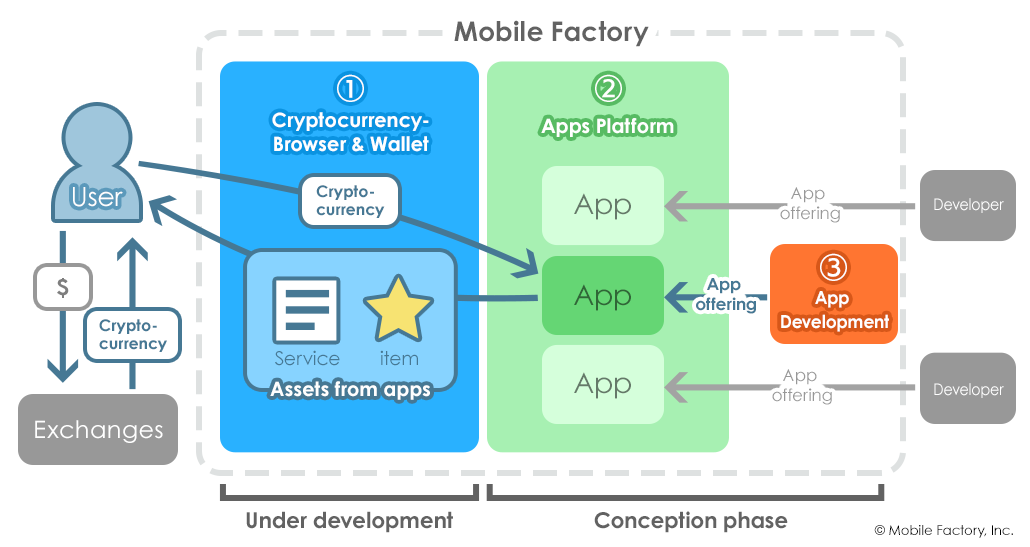 Regarding the “blockchain related services” that Mobile Factory has started development on, announced in the financial results of January 19th, 2018, there are currently preparations being made for a three phase release, and Research and Development (R&D) is progressing.

Background of the Start of “Blockchain Related Services”

At the beginning of R&D blockchain related services, we planned to enter the “game field”, which is our company’s greatest strength, but as a result of researching multiple games that were already released on blockchain platforms, represented by Ethereum, the following issues (*1) were found.

Therefore, in the game we are promoting R&D of, we believed that removing the above issues as much as possible will lead to satisfaction of users, and we decided to start R&D of not only games, but also application platform and mobile compatible browser with cryptocurrency wallet.

By realizing each of the above phases, we aim to build a distributed (decentralized) ecosystem, different from the centralized platforms so far. We hope to create a new economy that maximizes the use of blockchain technology that is expected to be used in various places in society, not to mention the entertainment field.

It is very important and necessary to fulfill legal requirements and clarify standards for accounting/taxation in the advancement of the project, so we are working together with experts in each field. We are also discussing with regulatory agencies as necessary.